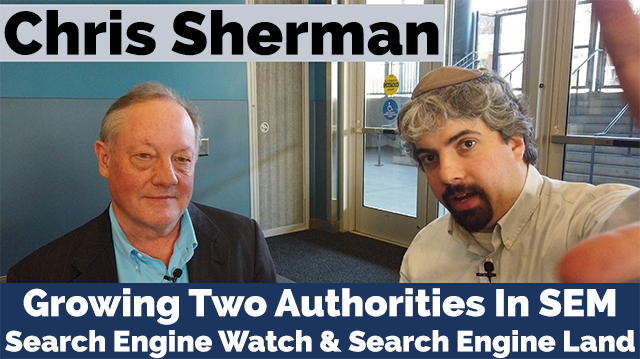 Chris Sherman has been serving the SEO and SEM industry since the super early days, from Search Engine Watch and Search Engine Strategies to Search Engine Land and Search Marketing Expo. He was there from the beginning and in 2019, at the last SMX event that year, Chris announced he is retiring. Here is my interview with this man, a man who helped form this space as we know it.

His first job in SEO was working for The Mining Company, which eventually became About.com (and now Dotdash). This site launched in 1997, just so you know the age of it. His job there was to write articles about the state of search, covering search engines like Excite.com and other older search engines. He met up with Danny Sullivan when Danny did the keynote and the Internet Librarian Conference. Danny spoke about his early paper on the Webmasters Guide to search engines, and this was the first of its kind. Then in 2001, Danny sold Search Engine Watch to Internet.com, and then he was hired to work at Search Engine Watch under Danny. Chris Elwell was the person who was involved in the acquisition and they moved into Search Engine Strategies, the conference.

He is going to be working on personal projects; word-working and cooking. He said he isn’t sure if he is done professionally but he has times to think.

You can subscribe to our YouTube channel by clicking here so you don’t miss the next vlog where I interviews. I do have a nice lineup of interviews scheduled with SEOs and SEMS, many of which you don’t want to miss – and I promise to continue to make these vlogs better over time. If you want to be interviewed, please fill out this form with your details.