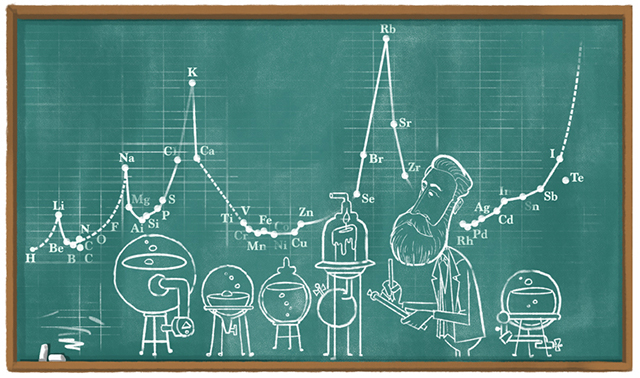 Julius Lothar Meyer, the German chemist who was one of the pioneers in developing the first periodic table of chemical elements, is being honored by Google today with a Google Doodle on his 190th birthday. Google wrote “Happy birthday, Julius Lothar Meyer, and thank you for braving the elements for the sake of scientific knowledge!”

This is what Google wrote:

Today’s Doodle celebrates German chemist, professor, and author Julius Lothar Meyer on his 190th birthday. Meyer was one of two scientists to independently discover the periodic law of chemical elements and pioneer the earliest periodic tables.

Julius Lothar Meyer was born into a medical family in Varel, Germany on this day in 1830. Initially devoted to the study of medicine, he soon shifted his focus to physiological chemistry. He earned his doctorate in 1858 and began his career as a science teacher the very next year.

In 1864, Meyer published a seminal textbook called “Die modernen Theorien der Chemie” (“Modern Chemical Theory”). The treatise included a rudimentary system for the organization of 28 elements based on atomic weight, a precursor to the modern periodic table. But Meyer was not alone in the sprint toward this scientific milestone, as Russian chemist Dmitri Mendeleev was independently developing similar ideas of his own.

Meyer designed a more comprehensive table in 1868, but before he could publish, Mendeleev released his own paper that placed all the known elements in one table and cemented his place in science history. Meyer’s subsequent 1870 paper was groundbreaking in its own right, as its graphical demonstration of the relationship between atomic volume and atomic weight provided strong evidence for the periodic law describing cyclical patterns among the elements. Meyer’s now-famous display is depicted behind him in today’s Doodle artwork.

I love learning new tidbits from these Google Doodles.