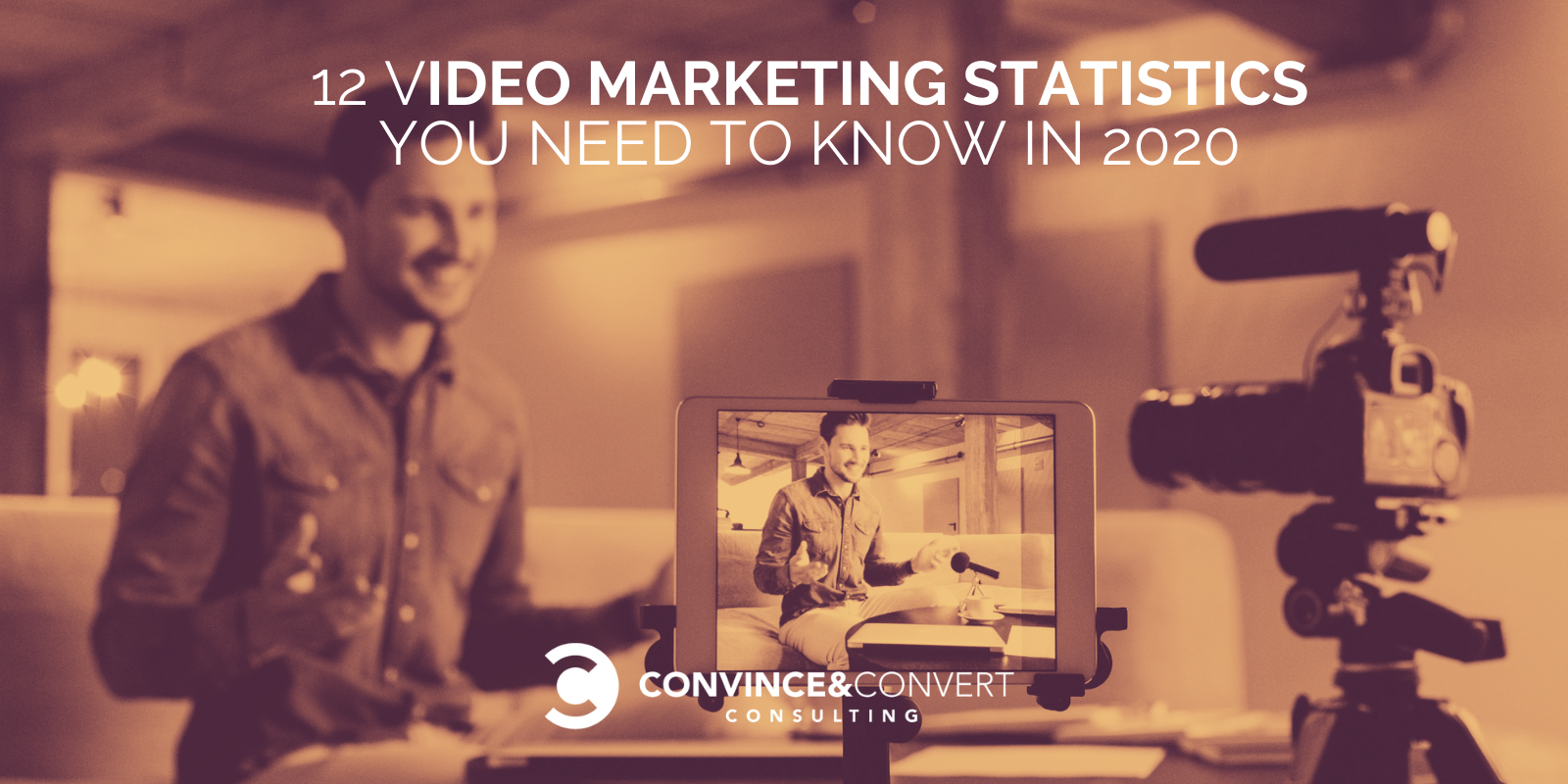 2020 is just getting started, and now is an ideal time to look at some video marketing statistics to shape your marketing plans.

In this post, we’ll dive into Vidyard’s Video in Business Benchmark Report and explore 12 key video marketing statistics from the research.

1. The Platform of Choice for Business Video Viewing Is Desktop 87% of the Time

If you’re creating videos primarily for a business-to-business (B2B) audience, keep in mind that 87% of the views for such content still happen on desktop devices. Mobile views for B2B content are rising, but desktop views reign supreme. This statistic makes sense since most B2B audiences watch such videos at work.

The platform of choice for business video viewing is desktop 87% of the time. #B2B #videomarketing @vidyard Click To Tweet 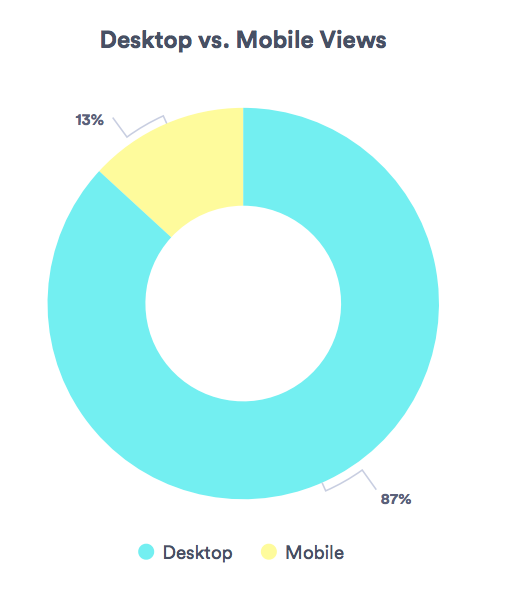 Why It Matters: The Vidyard report points out that designing videos for a desktop platform gives companies access to more features that make for a compelling viewing experience. You should not overlook responsive design, however, because keeping multiple screen sizes in mind ensures the content looks fantastic no matter how a person views it.

People have fierce debates about what day to publish their content, videos or otherwise. Vidyard’s data shows that most business video views — 22% — occur on Thursdays. The next most popular day was Wednesday at 18%. 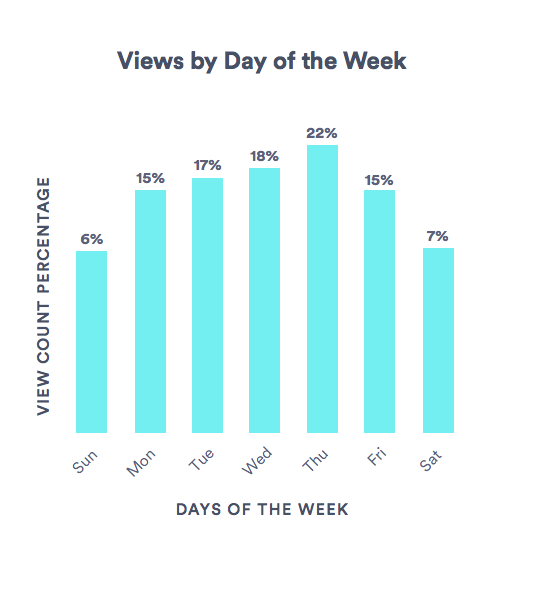 Business Video Views by Day of the Week

Why It Matters: Businesspeople likely feel the middle-to-end of their workweek provides the best opportunity to get engrossed in video content. They’ve probably already dealt with all the urgent issues that arrived over the weekend, for example. Some may also want to look at content late in the workweek so that they can casually ponder the issues raised during their more-relaxed weekends.

3. The Preferred Video Content Type for Businesses Is a Webinar in 56% of Cases

It’s understandably challenging for companies to decide which videos to create for business audiences. However, 56% of the time, they choose to make webinars. Demos and social media videos follow webinars, accounting for 52% and 51% of the videos that received company investment. 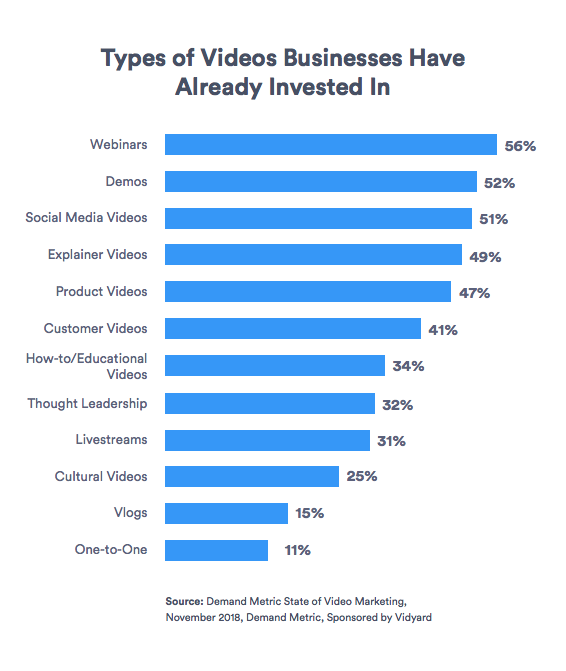 Types of Video for Businesses

Why It Matters: The Vidyard report also cites a statistic from InsideSales, whereby 73% of marketing and sales leaders mentioned webinars as one of the best ways to achieve quality lead generation.

Another high point that makes webinars especially attractive is there are several types used to drive profits. One is a webinar series, and it could attract more people to a business over time. Opportunities also exist for participants to weigh in about future topics. Nanomechanics, Inc. took that approach with a webinar series about nanoindentation, which is a technique for measuring the mechanical properties of thin films.

4. Companies Distribute Videos Through Their Websites 85% of the Time

Companies distribute videos through a wide range of channels, including YouTube, social media and email. However, the method they choose 85% of the time is through their website, according to Vidyard. 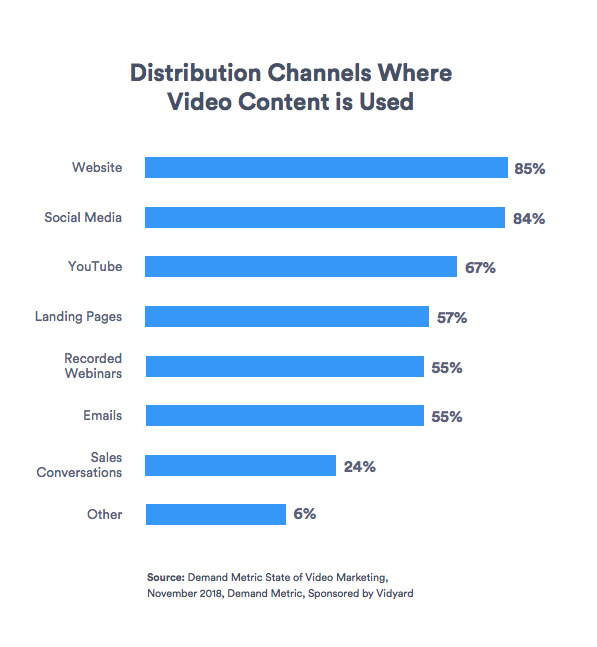 Why It Matters: Vidyard’s finding is not surprising. If brands host videos on their website, the likelihood goes up that a viewer could come across other online content.

KPMG, the multinational auditing, tax and advisory company, even uses video to directly speak to business people who might be looking for a change in career or work environment. The company’s website features several videos profiling what it’s like to work at the business. High-quality corporate videos work well for showcasing achievements that make somewhere an appealing place to work. They also convey things that words can’t.

5. 73% of Videos Are Two Minutes or Less in Length

Evidence suggests that video marketing in 2020 will be all about keeping the content short and sweet. The Vidyard report confirms that 73% of videos clock in at two minutes or less. Only 2% are 10 to 20 minutes long. 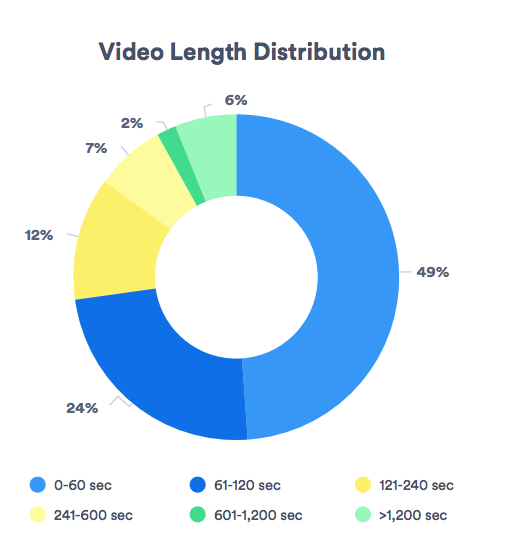 Why It Matters: We all tend to have perpetually busy schedules. This Vidyard statistic seems to indicate that the goal is to get viewers to stay engaged until the content’s end. The authors of the research suggest that businesses may have data showing that retention rates are highest with short videos compared to longer ones.

Vidyard mentions that the trend toward shorter videos did not start recently — it cited video statistics going back to 2016. In some cases, this characteristic of videos geared toward business people began earlier.

Take the example of the now-defunct service called BriefMe. It offered a news-ranking service that helped people with packed schedules figure out which news articles to read first. The company had a 2015 YouTube video that was one minute and 39 seconds long. They had an early understanding that time-strapped people want information but don’t necessarily have lots of time to digest it.

6. Only 15% of Businesses Do Not Use Metrics to Measure Video Effectiveness

Vidyard’s study indicated that an increased dependence on ultra-detailed metrics might be in the cards for video marketing in 2020. Only 15% of respondents said they did not use any data to gauge the success of a video marketing campaign. Even so, only 11% depend on advanced metrics, such as heat maps and viewer drop-off rates. 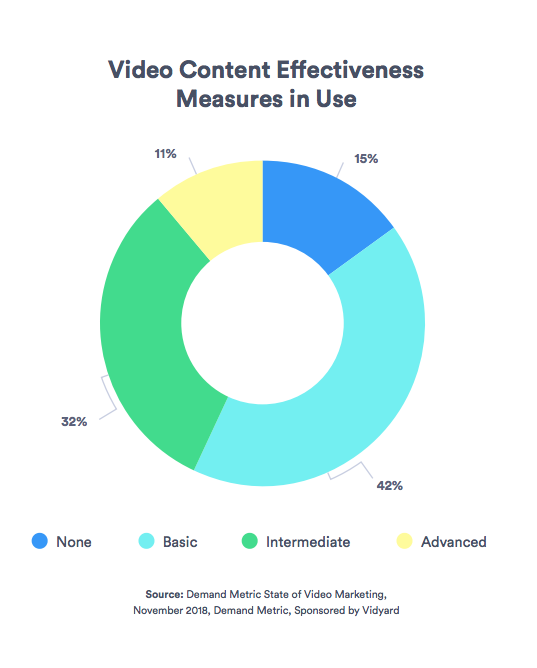 Why It Matters: Although more companies are warming up to the idea of video marketing, some still show reluctance. The ability to access metrics at any point in a campaign can teach businesses what’s working and what may require tweaking. As marketers get more comfortable with using basic metrics, such as consumption measures, they should gradually feel more comfortable about deploying in-depth insights with more value.

7. 68% of People Will Watch a Full Video if It’s a Minute Long or Less

Another statistic in the Vidyard report relates that 68% of people would watch a video in full as long as they don’t need to take more than a minute to do so. However, the figure drops by 18% if a video is 61 to 120 seconds in length. 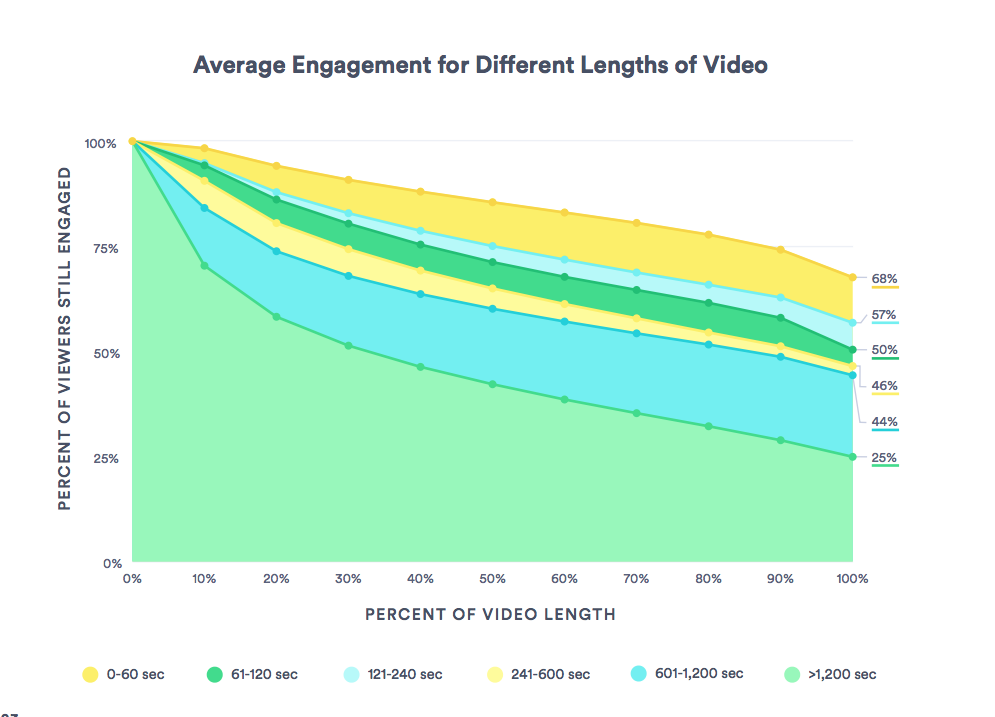 Why It Matters: Viewers may not feel compelled to sit through content in its entirety if it requires too much time. As a video marketer, you must take care to get your points across early and in a straightforward manner. That’s especially crucial to do if you have not yet established a trustworthy relationship with viewers.

8. 52% of Small and Medium Businesses Use Both Internal and External Resources to Create Videos

As you can see from Vidyard’s graph below, small and medium companies collectively use external and internal resources to meet their video production goals, with medium-sized businesses doing so slightly more often. Together, these businesses use a combination of resources 52% of the time. 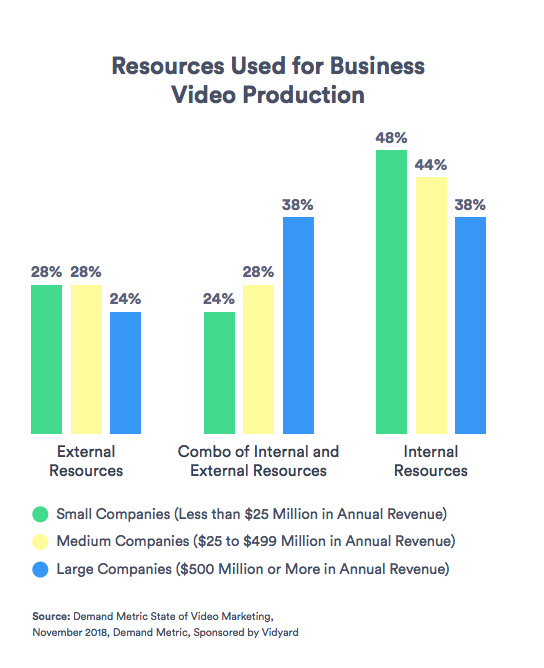 Why It Matters: Companies increasingly realize it’s smart to see what they can accomplish in-house, then select outside assistance to fill in gaps. However, companies of all sizes frequently depend solely on internal teams. Vidyard’s report suggests that companies are upping their investments in video production by either upskilling current employees or hiring video experts.

9. 13% of the Business Videos Published for the Year Appeared in October

You may expect to see a surge in videos at the start of the year and total percentages per month gradually decreasing. However, in 2018, the rates for videos published per month went up throughout the year, peaking in October at 13%. 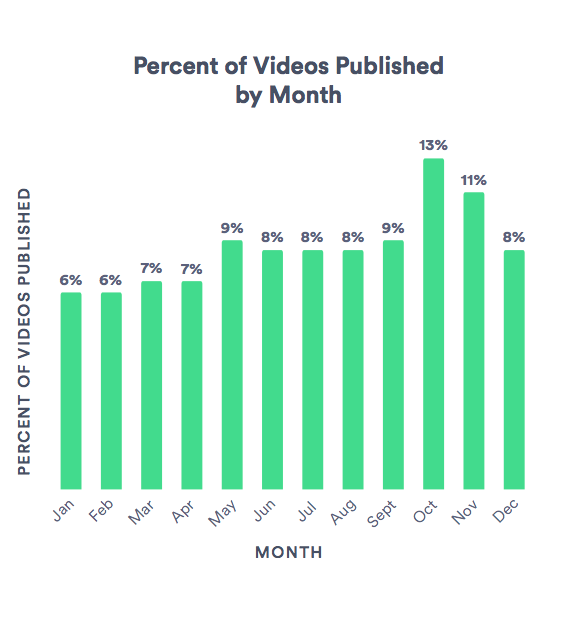 Why It Matters: Vidyard noted that several of the highest-volume months for video publication corresponded with the biggest seasons for conferences. Companies must unveil a carefully coordinated marketing effort associated with such events, whether they are organizing them, serving as sponsors or appearing within the event’s lineup as vendors or speakers. Videos can easily become a part of such campaigns, mainly to entice first-time attendees and create buzz.

10. Companies With 31-200 Employees Create Nearly As Many Videos As Those With More Than 5,000 Workers

You may think that a company’s size determines its video production capabilities, but that’s not necessarily true. As you can see from the bar chart below, companies with at least 5,000 employees created only 28 videos more than those with a team member count in the 31-200 range.

Companies with 31-200 employees create nearly as many videos as those with more than 5,000 workers Click To Tweet 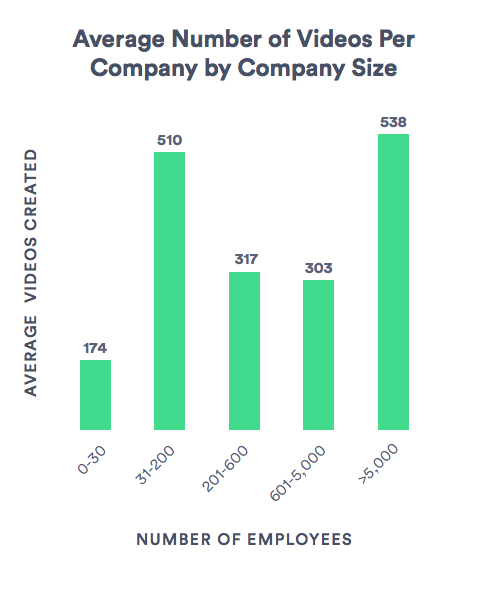 Why It Matters: Vidyard believes that the impressive number of videos created by smaller organizations reflects that companies believe increased production helps them compete with bigger businesses. Also, Vidyard clarified that many firms in the 31-200 group are likely startups or companies in a hyper-growth phase. Videos could help them capitalize on existing momentum.

Vidyard calculated the average number of videos created each year for companies in particular industries. The high-tech sector came out on top with 425 videos created on average. 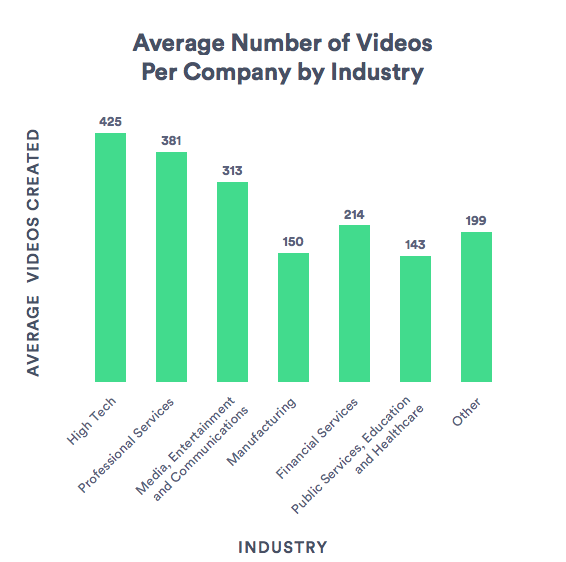 Average Number of Videos Created Per Company by Industry

Why It Matters: As mentioned earlier, videos can show things that are hard to describe in videos alone. Also, if a technical process is complex, people may prefer seeing a video to solidify their understanding. As such, it’s not difficult to understand why high-tech companies see videos as a must-have resource for reaching business customers.

12. People Watch the Most Videos in the Mornings if It’s a Weekday

Despite some fluctuations, people are most likely to watch business videos in the mornings if consuming the content during a weekday. 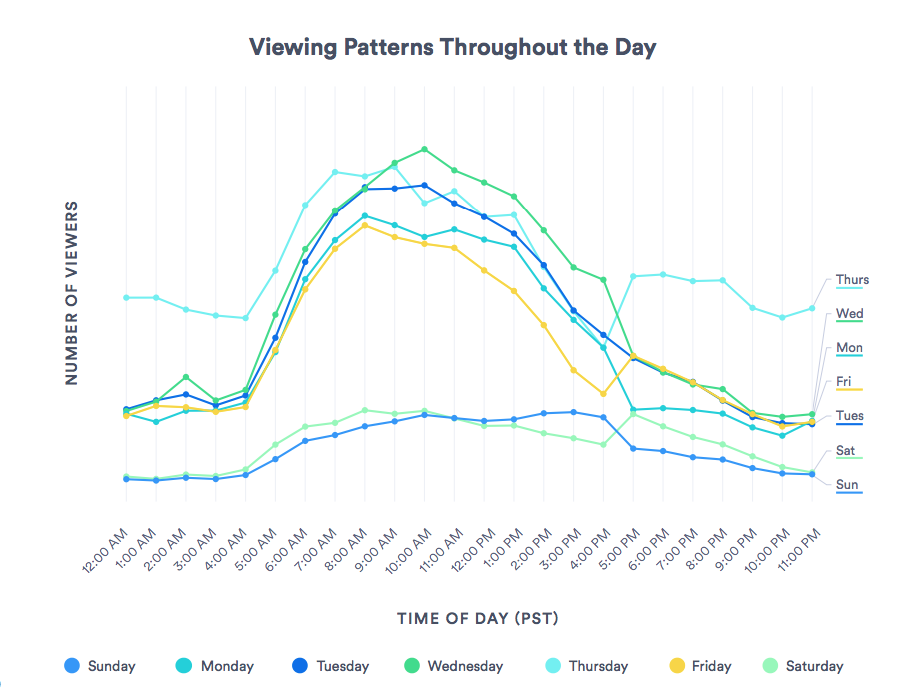 Video Viewing Patterns Throughout the Day

Why It Matters: You don’t want your videos to get lost in a crowded marketplace filled with fellow content producers. Therefore, timing is everything, and will likely remain crucial for video marketing in 2020 and beyond. Perhaps people are most eager to take in business videos in the mornings because doing so does not interfere with afternoon meetings. They could also decide that the morning works better because they can enjoy the content before getting deep into projects.

Hopefully, these statistics and takeaways have ignited your desire to maximize your video marketing potential this year. Regardless of your company size or industry, meeting milestones with videos is an outcome within your reach. And make sure to download the full Video in Business Benchmark Report from Vidyard.